You are here: Home1 / News2 / UCLG and UHC2030 join forces to transform the conversation on Universal... In a moment of urgency, with a global pandemic putting to the test our health and governance systems, the municipal movement and the movement for universal health care held a dialogue to discuss the importance of universal health coverage in the wake of the most important crisis of the 21st century.

“This pandemic shows that local service delivery is truly a backbone of the sanitary systems, that cannot solve crises like these by themselves. This dialogue is critical to bring the movement of universal healthcare and the local governments movement together, to ensure we can solve the health challenges of the urban era” Emilia Saiz, UCLG Secretary General and member of the UHC Movement Political Advisory Panel, UHC2030

“Even with political desire, and political will, it will be very difficult to achieve universal healthcare without the local and regional governments that are in contact with citizens. The importance of local action cannot be understated when it comes to universal healthcare or achieving the SDGs.” Dr. Githinji Gitahi, Co-chair of the Steering Committee of UHC2030 and Group CEO, Amref Health Africa 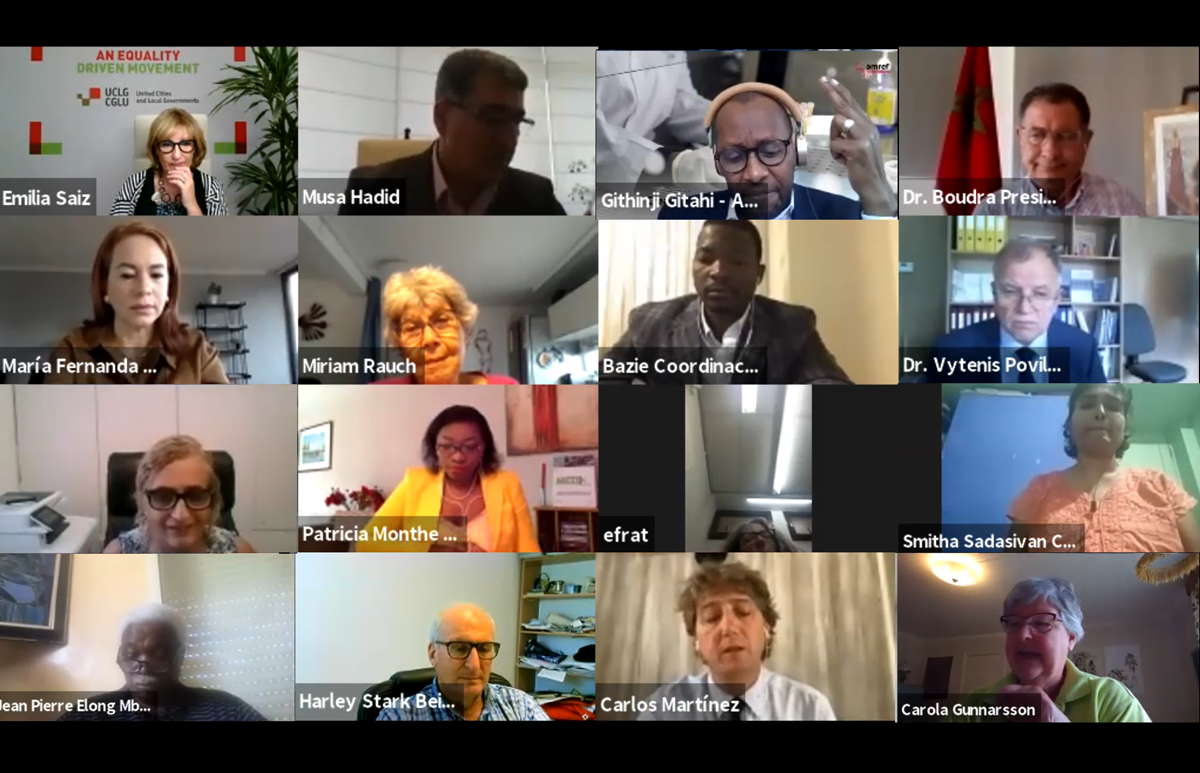 14 speakers, a number that encompassed mayors from all over the world, the President of the 73rd Session of the UN General Assembly María Fernanda Espinosa, as well as representatives from the Universal Health Care 2030 Movement, gathered in the meeting to debate the lessons learnt from communities during the pandemic, and to identify what our societies will need to do better, and transform, to ensure equal access to healthcare.

President of UCLG Mohamed Boudra opened the first panel with his experience as both a medical doctor and a local leader and argued that, for local and regional governments, following the message of the scientific community and the World Health Organization had been a critical guideline. To ensure Universal Health Care, he argued, a commitment from all civil servants and spheres of government is needed.

“During the pandemic, local policies and basic services have underscored the guidelines provided by the scientific communities, and we have endeavored to focus on the most vulnerable populations. It is these experiences that led to the elaboration of the UCLG Decalogue, which aims to ensure a sustainable transition that is mindful of the sacrifices made by our communities.” Dr. Mohamed Boudra, President of UCLG, Mayor of Al-Hoceima.

Patricia Monthe, Founder and CEO of MedXCare and PSC Core Action Group Member, UHC2030, argued that technology and telemedicine had been key during the pandemic, and called for a commitment at all levels to carry out universal health care. Dr. Githinji Gitahi, Co-chair of the Steering Committee of UHC2030 and Group CEO, Amref Health Africa called on “fiscal devolvement” as a critical aspect to ensure that local and regional governments have enough resources to carry out the local provision of health to their communities.

Mayor of Ramallah Musa Hadid highlighted how local and regional governments had carried out critical services as well as cultural services during the pandemic, and called for a joint reflection from all stakeholders on how to think about the aftermath, with public services at the forefront.

Smitha Sadasivan, CSEM Advisory Group Member, UHC2030 and Accessibility Consultant, Election Commission of India, touched upon the negative effects of the lockdown among people with disabilities, and argued for the importance of care policies in the aftermath, supporting those people that need it the most. Khadija Ahmad, Mayor of Nili, closed the first panel by calling for a better redistribution of resources towards the local sphere, citing the need to properly fund those governments that are at the frontline and ensure an appropriate response for all citizens.

Midori de Habich Former Minister of Health, Peru, opened the second panel arguing for the need for articulation from all spheres of government to include public health functions in the recovery. Jean-Pierre Elong Mbassi, Secretary General of UCLG Africa, argued for a focus on preventive health in the aftermath, to address further crises.

Vytenis Povilas Andriukaitis, Former European Commissioner for Health and Food Safety and member of the UHC Movement Political Advisory Panel, UHC2030 shared the idea of enhancing coordination among spheres of government in order to support those that are most vulnerables. Global agreements need to include new economic models and invest locally to make this happen. Carlos Martínez, Mayor of Soria and UCLG Envoy for the Urban Agenda, called for multi-stakeholder alliances, and for the renewal of the multilateral system to ensure the principle of subsidiarity is adopted among all spheres of government and actions are effective.

Joy Phumaphi, Co-Chair, UNSG’s Independent Accountability Panel for EWEC argued that SDGs and universal coverage are a promise, and that governance mechanisms are accountable to the delivery. Whole governance system and community involvement are critical in the aftermath., including vulnerable populations and voices. María Fernanda Espinosa, President of the 73rd Session of the UN General Assembly and member of UHC Movement Political Advisory Panel, UHC2030 argued for the need to carry out participatory approaches to health strategies, including those populations that have been invisibilised. A new multilateralism that considers all stakeholders, she added, is critical to ensure no-one is left behind

Carola Gunnarsson, Mayor of Sala and UCLG Vice President for Europe, wrapped up the session by arguing that health systems are essential for the future of health care, and that it is critical to have well-functioning democratic systems in order to provide health care for all.